Since the band was formed, they have played many venues across the country and abroad, which include; clubs, theatres, cruises, summer seasons, private functions and theme nights etc and have established themselves as a very popular Rock n' Roll outfit adored by many fans.

In 1991 the group teamed up with Jimmy Jemain, winner of Granada T.V.'s 'Stars In Their Eyes', performing as Cliff Richard and The Shadows, touring nationwide. The Flames have also backed some great Rock n' Roll legends, which include; Wee Willie Harris, Tommy Bruce, Terry Dene, Brian Gregg and Dave Sampson. All these shows have been 'sell outs' and probably the most memorable for the band was playing at the Olympia Ballroom in Liverpool back in October 2000 with Albie Wycherley,(Billy Fury's brother) topping the bill. On the same night The Flames also backed a great British queen of Rock n' Roll Jean Vincent. 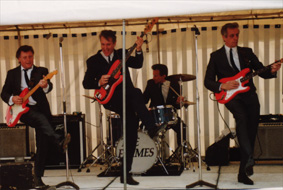