A fun loving band that delivers a high quality and entertaining show based upon a Spy Movies Theme, featuring costumes from the Austin Powers and Charlie's Angels films and more. Music ranges from Beyonce to Jackson Five, from the Bee Gees to Robbie Williams.

Costumes are from the Austin Power's and Charlie's Angels movies, along with more costume changes during the show.

Based in the North West of England, we perform all over the UK as well as abroad.

4000 watt Ad Lib PA system with a 20 channel mixing desk. We use equipment from the latest hi-tech stuff to ancient valve amplifiers, with Fender guitars and Korg Keyboards. Fully self-contained and requiring only standard power points. Light Show We provide a light show, which can include smoke (specially fire alarm compatible!) - all optional to suit the venue and the audience. For the technical, we use 2 x 4 Par 56 spotlight T bars, 4 Abstract Twister Four's and 1 Martin Mania DC2.

All of the guys and gals in the band have been playing in working bands for many years.

Dave ("Fat B*stard/Charlie") has been playing in bands since the 60's, and appeared on Granada TV with his band in 1968 (before Charlie's Angels in 1976!). He also taught the younger ones all he knows - which took about 10 minutes.

Lynn ("Harmony") has been playing the bass since she was 9 years old and appeared on National TV in 'New Faces', along with her brother Dave ("Austin") in the same band.

Dave was also an original member of the boyband 'Our Kid' who had a number 2 hit in 1976 with "You Just Might See Me Cry" and both Lynn and Dave have been in bands with Ian McNabb (Icicle Works) and Chris Sharrock (now Robbie Williams' drummer).

Anna ("Rhapsody"), who holds HND, HNC & BTEC qualifications in music, is a drumming tutor in Liverpool. She has been a drummer for Oliver at The Neptune Theatre, has appeared on Radio Merseyside's Billy Butler Show and supported Westlife at Liverpool's "Summer Pops 2003".

Neil ("Dr Evil") is classically trained and has been playing keyboards for 15 years and been in working bands for 10 years.

Vicky ("Melody") has been singing on stages since she was 14, has been in various duos and bands for nearly 10 years and has worked as a professional singer in Spain, Italy and France for the past three years. 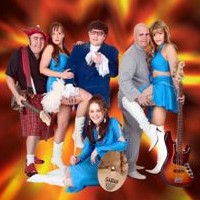