Barry Cryer’s variety work led him to the Windmill Theatre in London, a legendary school for comedians, whose graduates include Sir Harry Secombe and Peter Sellers, and it has since taken him to theatres around the UK.

Highlights of his career include night club shows with Danny La Rue, charity shows at the Players' Theatre Old Tyme Music Hall and Two Old Farts in the Night. More recently, he has delighted audiences with his one-man show, The First Farewell Tour, accompanied by pianist Colin Sell.

Barry's television and radio work has included many panel games, including Radio 4's Just a Minute and I'm Sorry I Haven't a Clue. He chaired three shows in the first series of Clue, before settling into the role of panellist - the only time in his life when he was delighted not to get the job. For Barry, recording an episode of I'm Sorry I Haven't a Clue is a sheer joy.

In 1998, Barry wrote his autobiography, You Won't Believe This But..., which has been broadcast on Radio 4. 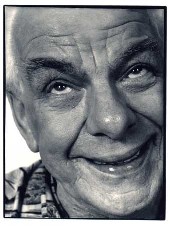