Following a well-trodden path, Ian started his show business life with two top comedy show groups of the 70's - The Montanans and Light Fantastic - before making the break as a solo artiste.

Sludge, as he is affectionately known in the business, was twice voted Midlands Comedian Of the Year and came runner up to Tom O'Connor in the Club Mirror National Awards.

Soon the small screen beckoned. Sludge became a regular member of the Tizwas cast and followed this with regular appearances on shows such as The Comedians, Summertime Special and Live From Her Majesty's, to name but a few.

Ian is currently in great demand both as a cabaret act and also as an accomplished After-dinner speaker, specialising in sporting functions, particularly his personal favourite football and golf, he’s a very funny guy!! 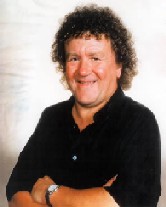