Pauline is known to most, as Britain's No.1 Stand up comedienne, and as such has appeared all over the world. She has performed in every venue imaginable including The London Palladium.

Her many television appearances include, The Comedians, Saturday Royal and Wogan.

But since 1986 Pauline has been hailed as one of Merseyside's favourite theatrical daughters and one of the country's finest actresses. Her first role was at the Liverpool Playhouse in "Chicago" as "Mama Morton" which was swiftly followed by "Rose" in "Gypsy". Then followed many different roles including musical, comedy and straight roles.

In 1992 she became Willy Russell's favourite "Shirley Valentine" and 'has continued to play "Shirley" all over the country.  Her West End Debut came in 1999 when she played the character "Faye Bogle" who was really a parody of Mae West in the Denis King/Dick Vosburgh smash hit musical "A Saint She Ain't".

In 2002 she starred alongside Jo Monro and Sam Kane in the musical comedy "Women on the Verge of HRT" which she hopes will tour in the near future.

Pauline has also had her share of T.V. acting, she played "Maria Benson" in "Brookside" for over twelve months and has also appeared in "Bread". 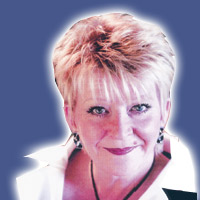