This highly successful duo has had 7 continuous summer seasons in Spain, and won numerous awards along the way.

Jonathan Cairns has been in the entertainment business for some thirty years, learning his trade in the North East’s Top comedy show band of the time “Nosey”.

By the mid Eighties Jonathan had also established himself as a very sought after Stand Up Comedian and such was the demand, Nosey was disbanded and a Star Comedian evolved.

Jonathan’s experience and popularity has seen him work on Television and Radio and abroad including Lanzarote, Teneriffe and Benidorm and more recently was chosen from hundreds of comedians to perform round the Mediterranean cruise on board the Edinburgh Castle.

By the mid 90’s Jonathan Teamed up with Comedienne “Sharon Day” and Perfect Scoundrels was born.

Perfect Scoundrels is an extremely popular and versatile show and can be tailored to suit most occasions. The show can consist of Slapstick comedy with hilarious characters such as Slob Marley, Geordie Elvis and other characters with full complimentary costumes, or The show can be Pure Stand Up Comedy banter between husband and wife with or without music & vocals and can be a 1 hour or 2 x 45 minute shows. Changing facilities are required close to Stage for the Character comedy. 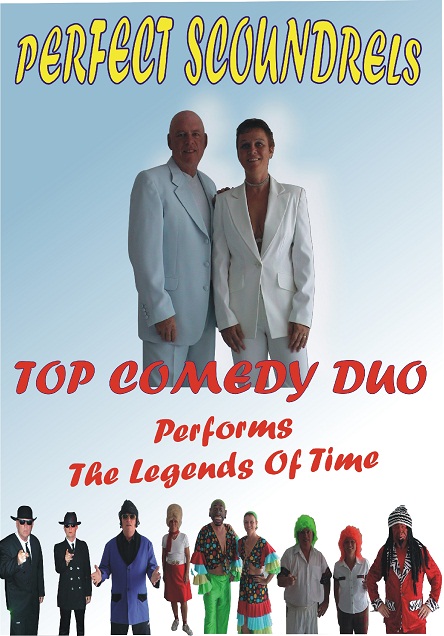