SCANDAL…..the very word conjures up images of something tantalizingly different, very interesting and possibly even a bit naughty!

It’s that forbidden fruit, a whisper behind the hand, that badly kept secret, the thing that everybody is talking about.

Upon seeing this duo in action, you would be inclined to agree that this is a very apt name for this dynamic husband and wife team who have been performing together for a long time.

Scandal formed in 1997 in Johannesburg, South Africa. They started off playing at various night clubs, pubs and events and soon progressed to more sought after and prestigious work in South African casino's and the corporate function market with a very wide range of clients. The band released an album in 2000 and had two songs played on most of South Africa’s major radio stations.

Since their arrival in the UK in 2002, they have gone from strength to strength, quickly establishing themselves as a very popular, reliable, high quality act. They have already gathered a following of young and older audiences alike.

Scandal's repertoire is vast and varied. The show is energetic, fast paced, funny and very 'audience- orientated.' There is something for everybody that experiences the show. Craig and Audrey have a wonderful rapport with audiences and they take great pleasure in involving them in the performance. An extremely high level of professionalism and dedication to the show, make this twosome a firm favorite with audiences. Ladies and gentlemen, may we present….SCANDAL!

Hole in the head- Sugababes

Jump (for my love)- Girls Aloud

Can’t get you out of my head- Kylie Minogue

Always have, always will- Ace Of Base

That don’t impress me much- Shania Twain

Living on my own- Freddie Mercury

Walking on sunshine- Katrina & The Waves

Livin' on a prayer- Bon Jovi

I’m in the mood for dancing- The Nolan Sisters

Sweet dreams (are made of this)- Eurythmics

Livin' on a prayer- Bon Jovi

Build me up (buttercup)- The Foundations

(Is this the way to) Amarillo- Tony Christie

You should be dancin’- Bee Gees

Can’t take my eyes off of you- Boys Town Gang

Billie Jean/ Can you feel it- Michael Jackson/ Jackson 5 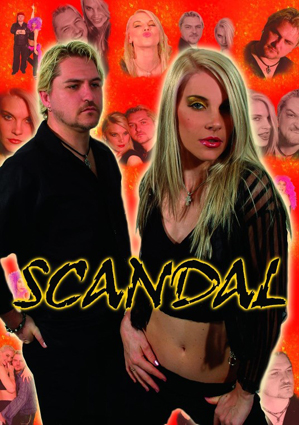