Sally Jaxx supported X-Factor's Journey South and Andy Scott-Lee on a recent tour around the UK.

'New Emotion revamp the Dolly Parton classic in a floor storming fashion, with Lead singer Sally Jaxx giving a brilliant performance that is taking the clubs by storm!' Quoted one newspaper recently.

Sally is no stranger to the pop world, in the past few months she has supported Pop Idol’s Darius, and recently played at the Rugby League Grand Final, held at Old Trafford, to a 69’000 strong crowd, alongside Lesley Garrett and Madness. Sally was featured on Sky Sports entertaining the crowd at another Rugby League game, and is now to be found at stadiums nationwide, performing crowd rousing anthems and her first solo single "Nine To Five”. Sally Jacks supported “Children In Need” with her performance of “Nine To Five” on BBC Radio Burnley.

Sally's career is not only growing, but she is becoming well known around the UK. Not only is she known as the new face for "New Emotion" she's also updated her image and a slight name tweak, so watch out Sally Jaxx is heading to your neighbourhood very soon. 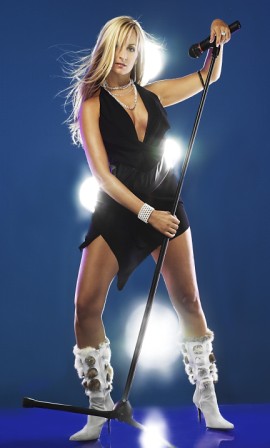