Alan Kennedy was born in Sunderland in 1954. On the pitch he gained the affectionate nickname 'Barney Rubble'.

He was Liverpool FC's right back for many a year in the early eighties and he won the reds two European Cups with the winning goals in the 1981 and 1984 Finals.

His play down the left side of the defence was outstanding.  From doing his standard role of stopping the goals at one end he was off at pace down the flank to help setup another reds attack.  He became a regular first choice and even after some injury and loss of form before the 1981 European Cup Final he fought to get his place back in the side and then repaid the faith shown in him by scoring the only goal of the game.

His call up to the England squad took longer than it should have done and just two caps for his country does not justify his ability.  He was a superb player amongst a solid back line for the reds.  He finally lost his place to Jim Beglin in 1985 and moved on to join Sunderland.

Today Alan does alot of work for charity and still keeps himself active by being one member of the Liverpool Masters team.

Alan is a First class After Dinner speaker and shares some amazing and funny story's from his career. 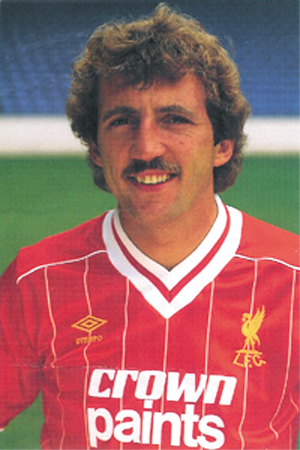