Alan Shearer is one of the most feared and respected strikers of the modern era and a wonderful ambassador for the game.

His debut was an indication of the wealth of talent Alan has when he scored a hat trick for Southampton against Arsenal on 9th April 1988 (4-2 victory). In 1992, at the start of the Premiership, Alan moved to Blackburn Rovers for a British Record Fee of £3.6 million, where he formed a lethal partnership with Chris Sutton, which became known as the SAS. Blackburn won the FA Premier League in the 1994/1995 season, with Alan contributing 34 league goals at the beginning of a sequence in which Alan became the only player in English football history to score 30 or more goals in three consecutive seasons.

On 6th August 1996, after Alan's successful Euro 96, where he finished the tournament's top goal scorer, Alan joined his beloved Newcastle for a world record fee of £15.6 million, fulfilling his childhood dream to play for his local side. As a Newcastle player, Alan has helped secure the club's position as one of the world's premier clubs and has enjoyed successful campaigns both domestically and internationally. 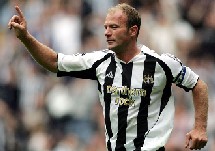