Arthur Albiston joined Manchester United as an apprentice in July 1972, turning professional in July 1974. He made his debut in a League Cup Third Round match against local rivals Manchester City in 1974.

He made 485 appearances in 14 years, playing at left back, and scored six goals. He helped the club win the FA Cup in 1977, 1983 and 1985. After leaving  Manchester United, Arthur signed for West Bromwich Albion, managed by ex-Red Devils boss Ron Atkinson, on a free transfer. By the time of his departure from Old Trafford he was the longest-serving player at the squad and the only player remaining from the Tommy Docherty era.

He made his Albion debut in a league match away at Leicester City early in the 1988–89 season, and went on to make 47 appearances and score two goals that season, after which he returned to his homeland to sign for Dundee, and went on to play for Chesterfield, Chester City, Molde in Norway and Ayr United. He retired from senior football in 1994.

Albiston also earned 14 caps for Scotland, making his debut on 14 October 1981 against Northern Ireland. His total includes one game at the 1986 FIFA World Cup, a 0–0 draw against Uruguay on 13 June 1986.

Following his retirement from playing, Albiston managed Droylsden (1996–97), was a junior coach at Manchester United (2000–04) and has also worked as a radio summariser for Manchester Independent. He currently works for MUTV, Manchester United’s official television channel, acting as match summariser during live coverage of the club’s reserve and academy teams.

Arthur is a witty and eliquent speaker, direct and anecdotal. 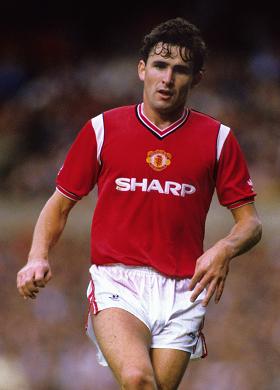