Chris Kamara, the  former 'hard man' defender and  midfielder, made 11 team moves during his long career as a player, including being part of the 1992 Championship winning Leeds United team managed by the legendary Howard Wilkinson.

He finished his playing career at Bradford City and it was with the Bantams that Chris Kamara began his short career as a manager. It was during his two-years in management with them that the team was promoted into the First Division, in season 1995-96.  It was also Chris who put together most of the team that won Bradford promotion into the Premiership.

Chris began commentating in 1996 while he was still a manager, working for Sky Sports and Yorkshire TV. He has also commentated for BBC Radio 5. Having moved on from management, Chriss talent as a presenter and football pundit meant a whole new career opened up for him.

It was in a dual role of commentator-presenter that Chris initially began his higher profile media  career. He linked up with Rob Hawthorne on Friday evenings for live Nationwide football and Rob McCaffrey on Sundays for Soccer Extra.

Chris then teamed up again, with Rob, in a new look Goals on Sunday. This review of the previous Saturday's top-flight action in England and Scotland, also includes high profile studio guests.

These days Chris Kamara's weekends are always booked up. He is out and about for his live, ground breaking gantry reports on Premiership matches for Sky's Soccer Saturday. This is the  programme where Chris offers his unique live opinions and reports on matches ,from all over the country.

He then returns to the Sky Sports studios in London and is set up to present the Sunday morning review show, Goals on Sunday.  Chris can also be seen every Saturday morning on Soccer AM where he links live to the stadium he reports from, on Soccer Saturday.

Chris is an accomplised after dinner speaker and personality. 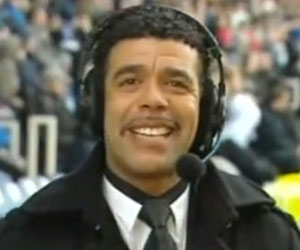