Dave “Harry” Bassett is without doubt one of football's colourful characters. Affectionately known as 'Harry', he plied his trade at several clubs with considerable success.

He is probably best known for guiding Wimbledon FC to the First Division in the 1980s after taking over from Dario Gradi at Plough Lane in 1981. Considering the fact that Wimbledon had only been elected to the Football League in 1977, it was an astounding achievement.

Bassett formed the original 'Crazy Gang' and although he left in 1987, many of the players he had signed took The Dons to an unexpected FA Cup victory in 1988 against the great Liverpool side under Bobby Gould.

His credentials as a hard-working and successful motivator are well-renowned.

He is also one of a trio on the panel that votes for the Scottish Mutual Performance of the Week, alongside Sir Alex Ferguson and Howard Wilkinson.

Dave is available for after dinner speaking  for both Sportsmans Dinner Evenings and Corporate Events. Dave has some great stories and anecdotes to share from a lengthy and very enjoyable career in football. 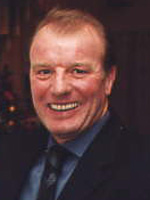