Denis Smith began his playing career with Stoke City on leaving school in 1963 and played 488 games for the club until hanging up his boots in 1982 having scored 41 goals.

During his time at Stoke he helped them to League Cup victory in 1972. Many Stoke fans consider him to be amongst their true greats, a local legend.

During Smith's 14 seasons with the Potters he became known for his 'die for the cause' mentality which led to him having a large number of injuries. These included five broken legs, breaking his nose four times, a cracked ankle, broken collar bone, chipped spine, breaking most of his fingers and toes and needing more than 200 stitches. The sequence saw him named in the Guinness Book of Records as the most injured man in football.

Smith has often declined a return to Stoke as a manager.

Available as an After Dinner speaker. 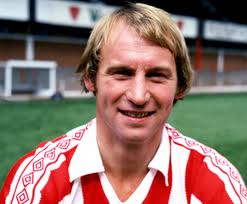