Frank McClintock was a leading player of his generation and is acclaimed as one of Arsenal's greatest captains. Frank transferred from Leicester to Arsenal in 1964 for a then British record fee of £80,000.

In 1970, he led Arsenal to a famous victory in the Fairs Cup and followed this up with even greater glory a year later, winning an historic league and FA Cup double. McClintock was a natural leader of men, a commanding and demanding captain he led by example and was respected by his team-mates for his never-say-die attitude.

Frank left Arsenal in 1973 after being controversially dropped, and enjoyed four successful years at QPR. He retired from playing in 1977 and made a move into management with Leicester City and then later Brentford.

Frank continues to retain a high profile in the game, appearing weekly as a Sky pundit.

He has a captivating football story spanning 45 years during which he achieved fabulous success. With his mix of football tales and humorous stories Frank is a must for any Sportsman's dinner. 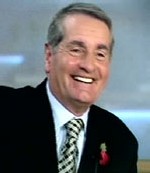