Gary McAllister is a former Scottish professional footballer and manager. He began his playing career at Motherwell F.C.

Scoring 8 goals in 70 appearances, until his fine performance in the 1985 Scottish Cup semi-final against Celtic F.C. caught the eye of Leicester City F.C. manager Gordon Milne. He signed for the English club, along with Motherwell team-mate Ally Mauchlen, for a combined fee of £250,000 in 1985.

McAllister went on to play for Leeds United F.C., Coventry City F.C. and Liverpool F.C. He was also a Scotland international and is a member of the Scotland Football Hall of Fame, having won over 50 caps.

Though serving for a relatively short time at Anfield, he played an integral role in the team that won a treble of cups in 2000 to 2001. His ability to play central midfield or on either wing made him a useful weapon in the armoury of then manager, Gerard Houllier. Gary was also known for his unmatched ability with the dead-ball and proved it time and again as he presided over most of Liverpool's set pieces that season. He also made a strong impression on the younger members of this squad, and seemed to have an almost heroic effect on players around him when they found themselves in a corner.

McAllister had a spell in management with former club Coventry City F.C. and, in 2001, he was made a Member of the Order of the British Empire for services to football. 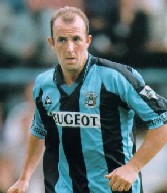