Gary will be remembered for the successful partnership forged with Steve Bruce at the centre of the Manchester United defence for a decade.

He began his career at his hometown club Middlesborough, before joining Manchester United in 1989 when he had 429 appearances and won four Premier League titles, three F.A Cups and a European Cup Winners Cup.

He appeared 22 times for England in an era of many great central defenders. Gary moved back to Middlesborough where he ended his playing career in 2001.

Gary is now pursuing a career in the media. 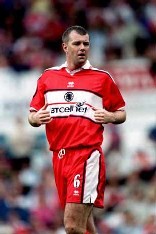