Terry entered professional football in 1960 when he signed with Chelsea F.C., playing over 200 games before leaving for Tottenham Hotspur F.C. in 1966.

In 1969, he joined Queens Park Rangers F.C. before finishing his playing career at Crystal Palace F.C. He was capped twice for England.

He achieved his main successes as a manager. He took over the manager's role at Palace whom he coached to two promotions in three seasons, to get them to the First Division in 1979. In 1980, he left for Queens Park Rangers, whom he led to promotion in 1983 and a very respectable 5th place in the First Division the following season.

In 1984, he became the Barcelona manager, led the club to the Spanish title and league cup but lost in the final of the first post-Heysel European Cup to Steau Bucharest on penalties. Terry returned to English management with Tottenham in 1987. They won the FA Cup in 1991 and finished 3rd in 1990.

He became the England Coach in 1994. Terry’s highest achievement came through his masterful tactical insights during the 1996 European Football Championship. His skill in analysis, coaching and motivation resulted in some of England's best ever performances, including a famous 4-1 demolition of the Netherlands, and only ended in the bitter disappointment of losing to Germany on penalties in the semi-final. Terry went on to manage Leeds United and the Australian National team, the ‘socceroos’.

He is a well liked and popular manager in the game with vast amounts of charisma. 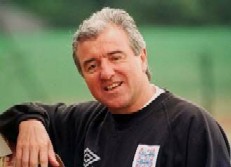