Billy D was born in Burnley. At the age of eight he picked up his Dad's guitar and he was taught how to play Wild Thing.

His Mum and Dad encouraged him to play and perform as much as possible. At the age of eleven, he was entering talent shows at caravan parks and local events such as the Nelson Star Quest where he came third. Billy performed songs by Oasis, The Kinks, Robbie Williams and other popular favourites.

After passing GCSEs, he progressed to Burnley College for a BTEC National Diploma in Music Practice. It was whilst being on the course he started to gig using backing tracks. He soon became recognised in the local area as Billy D. Following the BTEC course, he progressed to Preston University where he earned a BA Honours Degree in Contemporary Music.

Over the years he has built up a selection of songs that can suit most audiences covering favourites from the 60's to the present day. Billy has also built up his own recording studio where he records and edits his own material. Every week Billy joins a group of professional musicians for a Jam. Fortnightly he fronts the night with his band, The Billy D Band. Billy is currently working across the country performing as much can.

Billy is a young and talented guitar vocalist who always gives 110% on stage Singing classic hits from the last 4 decades. 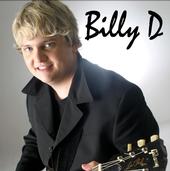