Freddie Mensah is fast becoming a rising star on the entertainment circuit.

His distinctive and unique vocal sound and song-style is a mixture of classic soul and R&B with a twist of gospel, Freddie has been described as Motown for the 21st century.

Listing influences include Soul greats such as Aretha Franklin, Whitney Houston and Luther Vandross, Freddie represents a new wave of honest, genuine and openhearted soul performers. His performances have been described as exciting and entertaining, with a good choice of popular songs and audience participation.

As a songwriter, Freddie’s songs have all the qualities of the greatest Soul music, providing soundtrack to seduction and musical therapy for the broken-hearted in equal measures. It has often been said that his studio recordings do not do his live performances any justice! In Freddie Mensah, true soul has a new star! 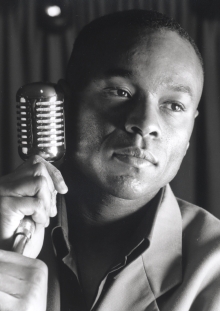 “…sings with smooth sincerity and a voice that is creamy and delicious.” Showcall Showcase I, Leicester: Reviewed by THE STAGE 7th November’05

“…has an instant appeal with his gentle caressing style, kind of reggae but with soul and jazzier inflections. A surefire audience pleaser.” The Playlist Showcase, Blackpool: Reviewed by THE STAGE 12th February’04.