This show is available either with recorded backing music or a live band.

Widely recognised as one of the classiest and accomplished jazz/swing vocalists in the UK, GARY is currently making a name for himself on the international scene with his 'Salute to Sinatra' show.

He also performs a 'Tribute to the Kings of Swing', featuring songs associated with Frank Sinatra, Nat 'King' Cole, Dean Martin, Tony Bennett and Matt Monro amongst others, which have recently been re -popularised by Robbie Williams and Michael Buble.

In addition, GARY also performs 'An Evening of Jazz & Swing' where he combines some of the great swing classics with some jazz standards from the Great American Songbook

He can perform with recorded backing music if required, but mainly appears with a trio or quartet. He is also a regular guest vocalist with the acclaimed 18-piece Keith Baldwin Big Swing Band and is the principal vocalist for composer TONY HATCH, whenever the legendary songwriter performs.

As well as his appearances abroad, which have recently included another six-month season in the Balearic Islands, GARY is also available for private functions, corporate events, weddings and short cruises. 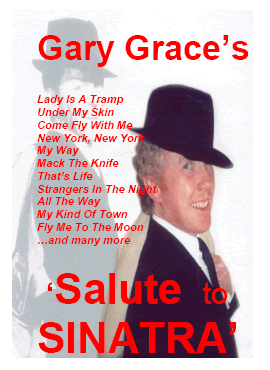