Gary has received international recognition for his ‘tribute act’ to Neil Diamond. He receives fan mail from the official Neil Diamond fan club!

Gary shot to fame when he appeared on Granada TV’s “Stars In Their Eyes”. His uncanny vocal similarity has earned him a place on the pages of magazines & newspapers across the world. After touring New Zealand they asked him back for a further two years running.

Gary’s overwhelming popularity from when he first appeared, and won his heat on the smash hit T.V. series “Stars in Their Eyes” after which he went on to win a proud second place in the Grand Final. He returned to the T.V. screens for several further appearances on special “Stars in Their Eyes” programs.

During his tribute act Gary performs classic favourites such as:
Love On The Rocks 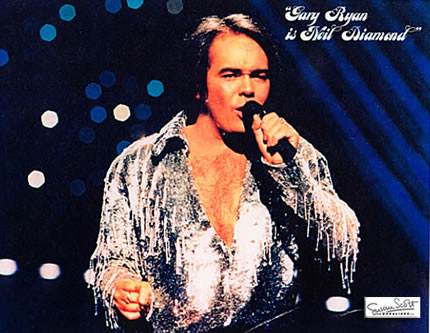